Our official access to information request has been received.

The clock is now ticking.

Please keep posted for further developments in this case.

Should you decline to agree to these terms and conditions, DEMOCRATIQUE.CA INC. politely requests

DEMOCRATIQUE.CA INC. has expedited an official access to information request regarding this case to the attention of 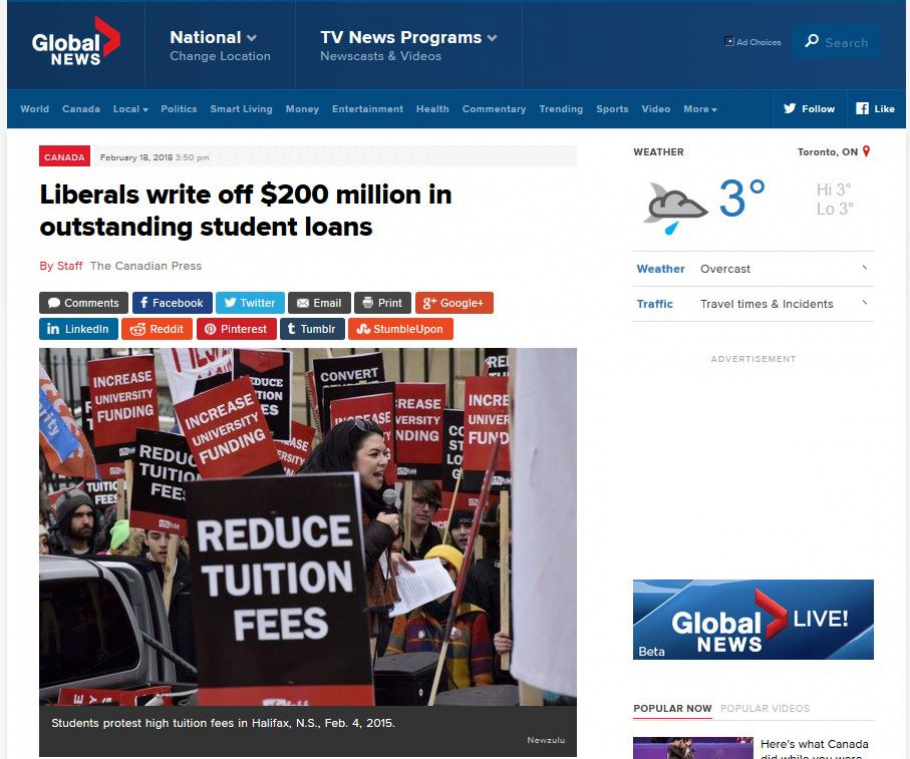 why was QUéBEC excluded under this federal initiative???

wE, The Citizens, DEMAND PRECEDENCE and equality IN QUéBEC!!!

WE, THE CITIZENS, DESERVE PRECEDENCE and equality IN QUéBEC!!! 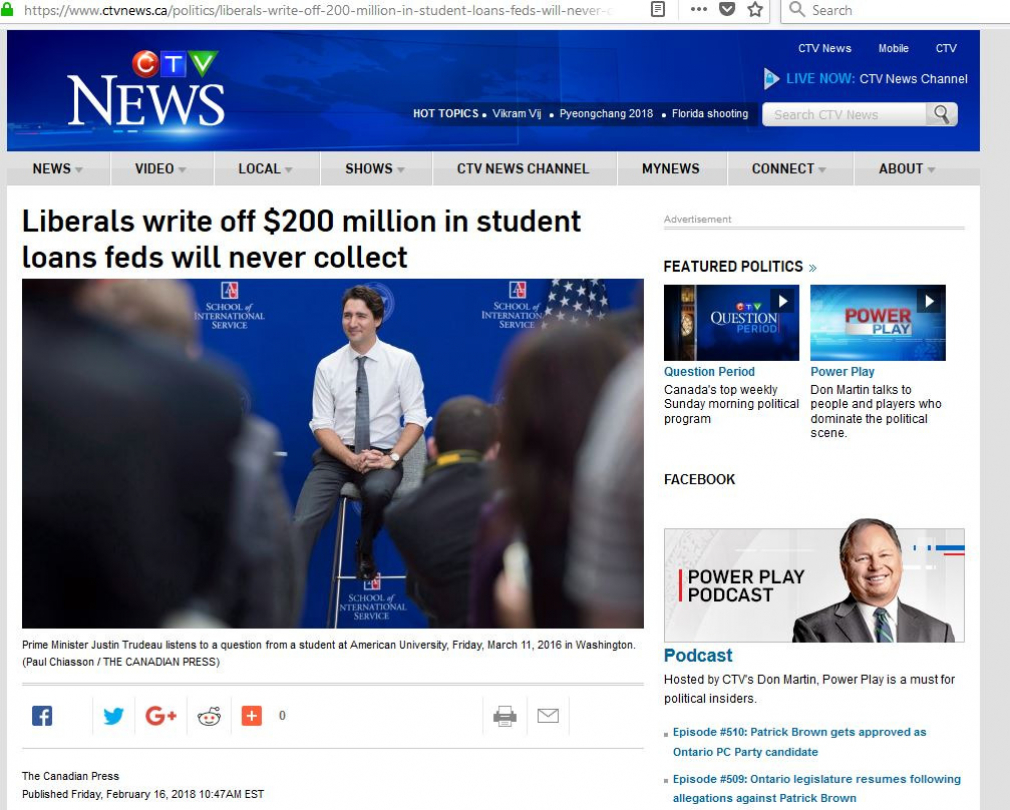 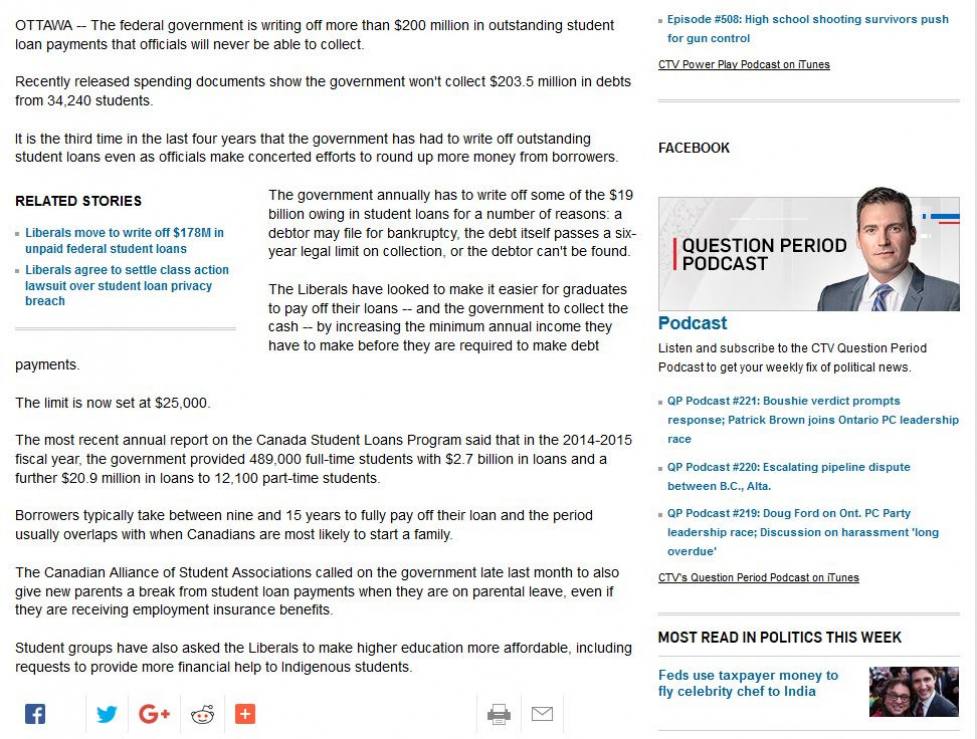 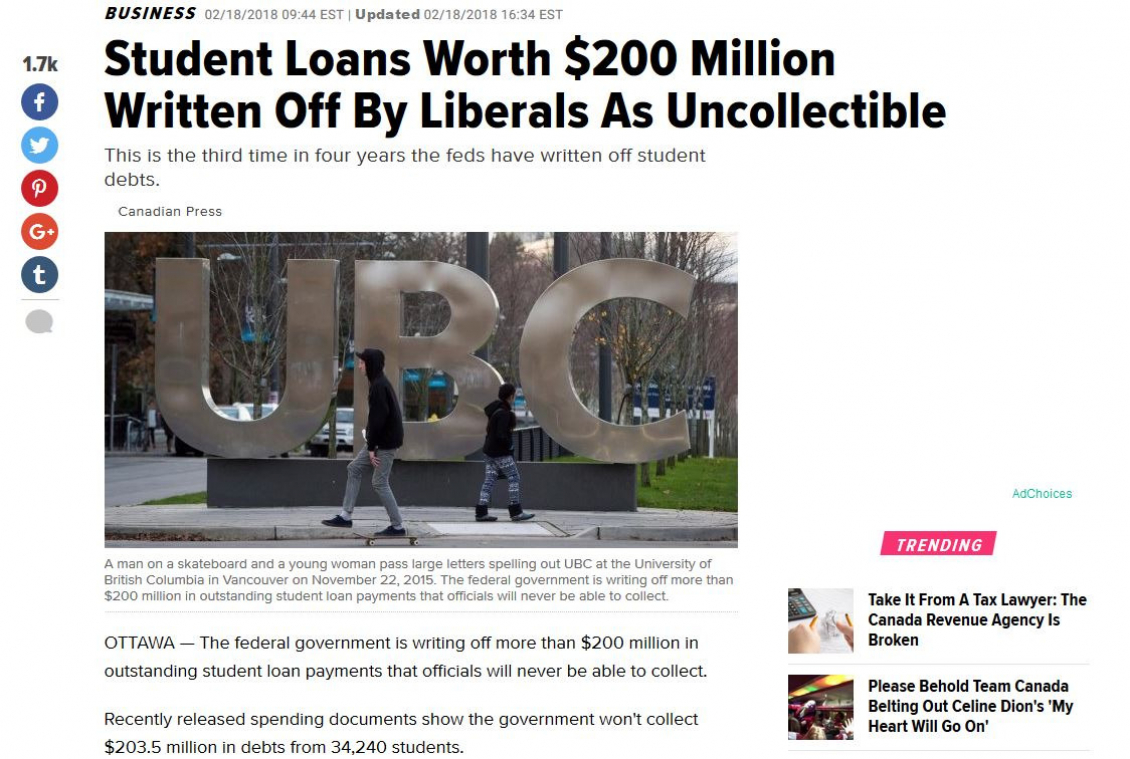 Fair dealing is a statutory exception to copyright infringement and is also referred to as a user's right (as opposed to an owner's right). According to the Supreme Court of Canada, it is more than a simple defense; it is an integral part of the Copyright Act of Canada, providing a balance between the rights of owners and users. To qualify under the fair dealing exception, the dealing must be for a purpose enumerated in sections 29, 29.1 or 29.2 of the Copyright Act of Canada (research, private study, education, parody, satire, criticism or review and news reporting), and the dealing must be considered fair as per the criteria established by the Supreme Court of Canada.

The reply was in reference to our access to information request (February 13, 2018). We are currently reviewing all information received.

This report has been updated at 6:45 PM.

In response to our access to information request dated February 13, 2018, the Quebec Education Minister's Office "legally"

requests a 10-day extension. The Ministers's office states that the delay is necessary due to "certain constraints."

It is not clear what constraints they are referring to. In the weeks to follow, DEMOCRATIQUE.CA INC. will be meeting with

very important officials regarding our case. In the meantime, we encourage everyone to keep posted. Expect a news release.

On March 22, 2018, DEMOCRATIQUE.CA INC. expedited a formal request to the attention of

In this request, we ask minister David to follow Ottawa's lead in writing-off certain

Will the government of Québec respect fairness, equality, and inclusion???

Unfortunately, Québec WILL NOT BE voluntarily writing-off any uncollectible student loans.

Why is Québec EXCLUDED from this federal write-off?

DEMOCRATIQUE.CA INC. addressed its letter to the attention of Minister David in ENGLISH.

A written reply was received in French. No courtesy translation was ever provided.

Minister David did not directly reply to our letter.  Requests to meet with her were ignored.

DEMOCRATIQUE.CA INC. expedited a formal request to the attention of the Minister Responsible for Higher Education.

In this request, we ask the minister to follow Ottawa's lead in writing-off certain unpaid student loans in Québec.

WILL OUR ELECTED OFFICIALS IN THE QUÉBEC NATIONAL ASSEMBLY FOLLOW OTTAWA'S LEAD???

Excerpt of our formal letter that was expedited on March 22, 2018.

This conversation is in reference to DEMOCRATIQUE.CA INC.'s expedited, written request to the attention of the CAQ (March 29, 2018).

In this request, we asked the CAQ for their position regarding the write-off of certain uncollectible student loans in Québec.

Will the CAQ stand up for students across Québec in this matter?  Will the CAQ make any commitments?

Today, we regret to inform you that the CAQ has confirmed their position. Unfortunately, at the present time,

the CAQ has OFFICIALLY stated that they have no comment regarding this election issue.

DEMOCRATIQUE.CA INC. has yet to receive a formal reply from the Québec Minister of Higher Education or the Québec Liberal party.

Their official position regarding this student loans initiative is still unknown.

WILL OUR ELECTED OFFICIALS IN THE QUÉBEC NATIONAL ASSEMBLY FOLLOW OTTAWA'S LEAD???

DEMOCRATIQUE.CA INC. would like to take this moment to cordially congratulate you and your team on a landslide victory this past October 1st election.

We are pleased to see that a new government has been formed with much anticipation for major change. We look forward to full transparency

And full accountability at the Québec government level, and for many years to come.

At DEMOCRATIQUE.CA INC., we understand and appreciate that it is very challenging and important work to form a new government.

We equally understand and appreciate how important it is for a newly formed government to keep campaign promises and words.

With this said, DEMOCRATIQUE.CA INC. is looking forward to hearing what you plan to do regarding this matter, including what steps

Your government will take in the DEMOCRATIQUE.CA  INC. Québec Student Loans and Bursaries Case.

Under your leadership, will the Government of Québec FINALLY take a positive role in implementing this student loans initiative?

Québec was excluded from this Federal initiative under the former Québec Liberals while continuing to tirelessly pursue these debts.

In light of the former government's disregard of this case, we ask that you please do everything in your power to ensure that

Québec is not excluded under a newly formed CAQ majority government.

A strong Québec within a strong Canada will only be achieved through democracy, fairness, inclusion, and equality for all Canadians alike.

Democracy, fairness, inclusion, and equality, represent our beautiful province of Québec, and our home and Native land, Canada.

Premier Legault, we are very confident that your administration will do the right and ethical thing in this very important case.

We anticipate the final closure of this case in the very near future.

Your early attention regarding this matter would be utmost appreciated by no later than Friday, December 7, 2018.

We would like to take this moment to cordially thank you and everyone involved in this very important decision that touches many Québecers. 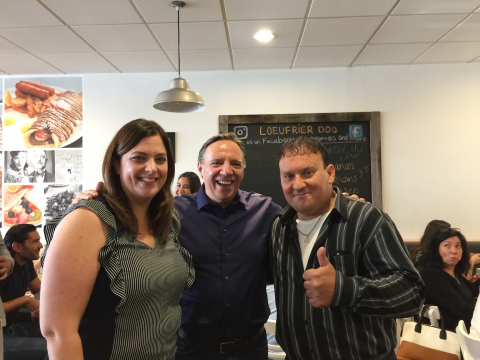 From left to right:

At this event, Joseph Pugliese asks Québec Premier, François Legault, (ON VIDEO), if he has NOT forgotten "Les Deux Dossiers", (THE TWO DOSSIERS)?

"Les Deux Dossiers" refers to the Québec Student Loans and Bursaries case as well as the CINTEC case.  On July 28, 2018, both cases were discussed at an official CAQ campaign brunch. The conversation happened at L'OEUFRIER DDO in Dollard-des-Ormeaux, Québec. This was prior to Mr. Legault being elected as Premier of Québec.

On November 7, 2018, and following the newly elected government's swearing-in, DEMOCRATIQUE.CA INC. expedited a follow-up letter to the attention of Premier Legault. This letter was with respect to the Québec Student Loans and Bursaries Case, including the discussion regarding "Les Deux Dossiers" between Mr. Legault and Joseph Pugliese at the July 28, 2018, CAQ Campaign brunch.

In light of this positive news, DEMOCRATIQUE.CA INC. is looking forward to our newly elected government's FORMAL SOLUTION in putting FINAL CLOSURE to the infamous "Les Deux Dossiers", also known as the Québec Student Loans and Bursaries case as well as the CINTEC case. At the present time, DEMOCRATIQUE.CA INC. is very relieved that  Premier Legault appears to have RECONFIRMED his interest and commitment to helping DEMOCRATIQUE.CA INC. put a final closure to these ongoing cases.

We are referring to the November 7, 2018 letter titled, "The DEMOCRATIQUE.CA INC. Québec Student Loans and Bursaries Case, follow-up regarding our brief discussion at L'OEUFRIER DDO on July 28, 2018" expedited to the attention of Premier Legault (with copies sent to Geneviève Guilbault, Jean-François Roberge, Isabelle Charest, Hélène David, and Vicky Michaud).

IS IT SAFE TO SAY THAT PREMIER LEGAULT WILL KEEP HIS WORD ON TWO OCCASIONS?

We are very confident that Premier Legault will "deliver the merchandise" as quoted by the Premier himself in his speech at the December 13, 2018, CAQ Victory Ball.

Premier Legault, once again, DEMOCRATIQUE.CA INC. would like to take this moment to cordially thank you and everyone involved in this very important decision that touches many Québecers. Under your leadership, we anxiously look forward to welcoming the successful and final closure of "Les Deux Dossiers" in early 2019.

From left to right:

PREMIER LEGAULT, THE FEDS HAVE WRITTEN-OFF

FOR THE FOURTH TIME IN THE PAST FIVE YEARS... 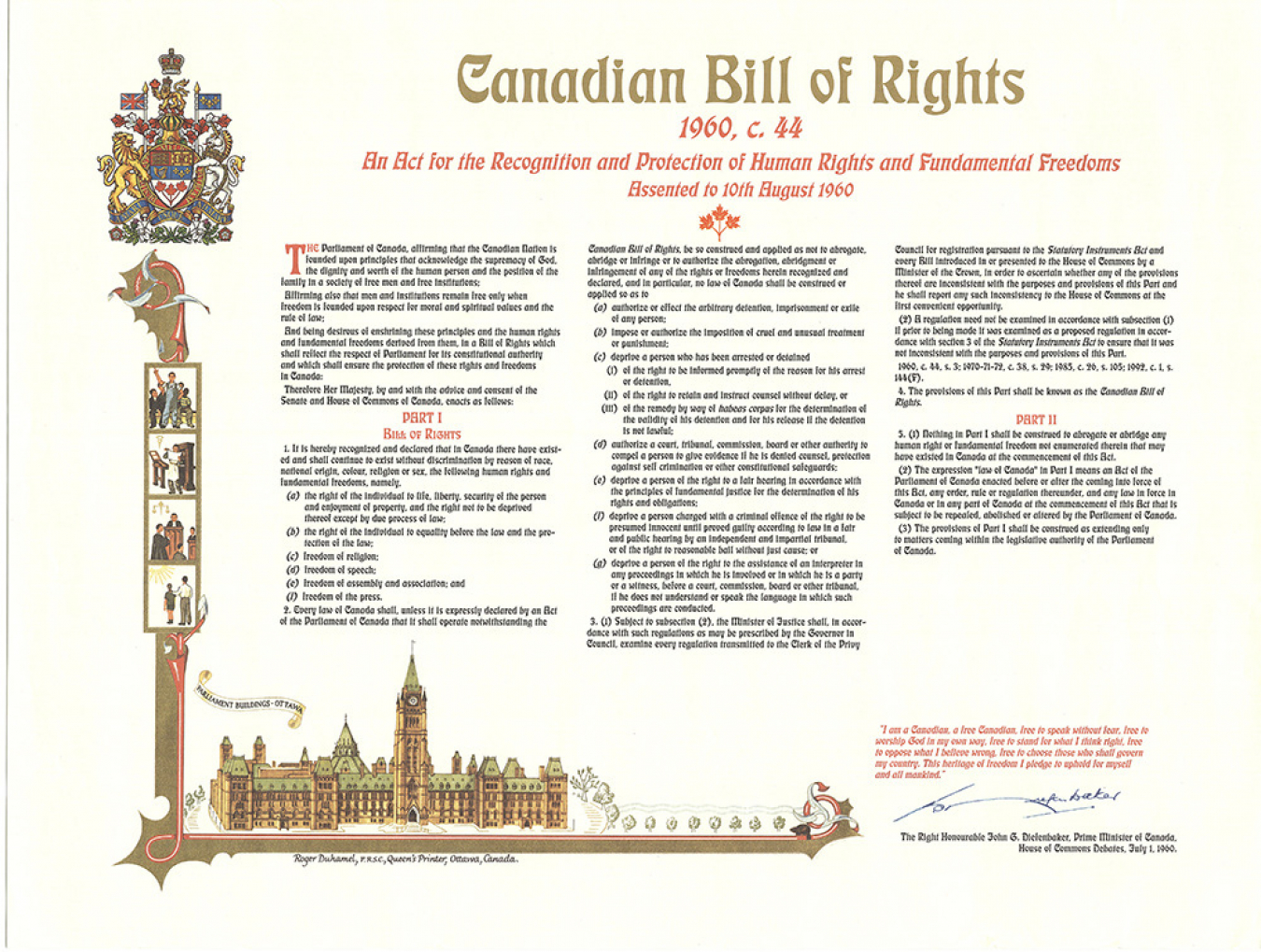